The entry into astrophotography should proceed with a certain professionalism - that was the I was used to dealing with photography and image processing in my agency life.

But things turned out quite differently at first.

Somewhat more surprised I took the statement of the telephone salesman of an Astro-Online shops to the knowledge, who sold me a system for a fraction of the planned budget.
According to the motto: "If pull the customer quickly over the table, so he should at least feel the friction heat as pleasant." (Edit: it’s a german saying “pulling someone over the table” means cheating or taking advantage of)

So, I was in possession of an astrophotographic system with a mount (allegedly of the 20kg-class) of East Asian origin and a SC telescope.
The use of the mount in my garden made me despair. The recommended stand-alone-guider refused to work continuously refused to work, because at least one axis of the mount due to gaps or misalignments of the teeth violently deflected. I had to swing around, noises were produced, that the neighbors thought, that I was tampering with their balcony at night saw on their balcony at night.

To make a long story short, I broke the challenge, with a telescope of more than two meters focal length and such a mount to produce photos, after three months and many filled hard disks with line-track and zigzag images. A friendly mechanic opened the mount out of curiosity, which amused him very much. Sardonically he remarked that I had bought a fat whisk for almost 2000 Euro.
One had the lack of precision by using viscous grease between the gears. The part had to go and my personal, new goal was, as the adviser of the 10micron importer later described: "Tools instead of toys!"

The way to find a good mount was then to search for the best astrophotographers to be found on the Internet. Whenever I googled a craftsmanlike photo, I looked at the corresponding homepage and the equipment used.
Almost always the 10micron GM2000 QCI was mentioned there as mount - it seemed to be worth to be looked at more closely. In 2011, the new version "HPS" with encoders should be available, which suits a comfortable person like me:
Once an alignment is performed at a fixed location, the mount does not lose its orientation, even if the instrument is changed on it and the axes have to be loosened for this. Asked by phone at the importer Baader-Planetarium, if they could send me such a new "HPS" mount now, I heard - and I am still sure - noises, which came from body twitches of suppressed laughing spasms. Apparently, the demand for this model was enormous and longer delivery times were the result. My order was gratefully accepted with the comment that astronomy also meant patience.

Since my ancestors apparently did not manage so well and did not bequeath me a castle with a empty east wing, which would be suitable for an observatory, thus a small observatory had to be created in the domestic garden. 2.1 meters in diameter was then the compromise with which I gave the preservation of my so far well-functioning relationship at least a medium-term chance.

Finally, in December 2011, the system, complete with a 12" astrograph and SBIG STL11000 camera for deepsky and optionally a 14" SC with DMK cameras for planetary subjects, was mounted in the observatory and remotely controllable from the house. No word about technical data of the mount here, they can be found on the German website of 10micron.
Rather I would like to report from the side of a user, how the further experiences were.

Everything started with the alignment, which is unexpectedly easy and fast: 4-star alignment, mechanical alignment at one star, another 4-star alignment - done! It took me 30 minutes; an experienced user can do it in half the time. First tests with the 12" Newton with 1100 mm focal length brought an unexpected result for me: A 10-minute test at the star showed a maximum deviation of one pixel on both axes without guiding system. What a comparison to the fat whisk!
The menu navigation of the controller is (almost) self-explanatory and very logically structured. Most parameters are preset, so except for local data and time, the mount can be considered a "plug & play" system. To operate a competitor's product that was initially on the short list, and the only one that comes close to the values of the GM2000 HPS, would have required on-site training with the manufacturer or at least a university degree in computer science. This alone was a reason for me to decide against this mount. In my opinion, the menu navigation is one of the many strengths of the 10micron GM2000 HPS.
The mount certainly has many other features that have not yet opened up to me as a beginner and will certainly not open up to some extent.
Mentioned here is the possibility to track the space station ISS or satellites, which is certainly a nice marketing gimmick, but astronomically as useful as a flying luminous worm at the mating ritual at new moon to photograph razor sharp.
My first deep sky object was to be M51 and thus also my first successful photo ten months after the fat whisking experience. The mount is remotely controlled via a 30-meter network cable and MaximDL software, which also accesses the CCD and guiding camera. An on-screen virtual hand control box allows additional, external access to all GM2000 HPS functions. A total of 5.5 hours of light in LRGB from what is actually a completely unsuitable wooded garden on the outskirts of a central German metropolis are included in my first image. The mount remained unnoticed during the shooting, it just worked perfectly in the background and allowed to concentrate on the essential things.
After four months without a single problem I completed the instruments on the mount.
In addition to the 12" astrograph, a 10" MAK or 11" SC and an 80mm guide tube now sit on the GM2000 HPS. With camera, filter wheel and other accessories, the mount carries a total of 46 kg (without counterweights), which it easily handles photographically.
Worth mentioning here is the software-supported balancing of the instrumentation, which is especially useful
which is very helpful when several telescopes are installed in observatories.

This short field report is also a tribute to high quality astronomical equipment.
If you have the budget and want to make very good deep sky images, this mount of the 50 kg class is a professional tool that rather solves problems than produces them. 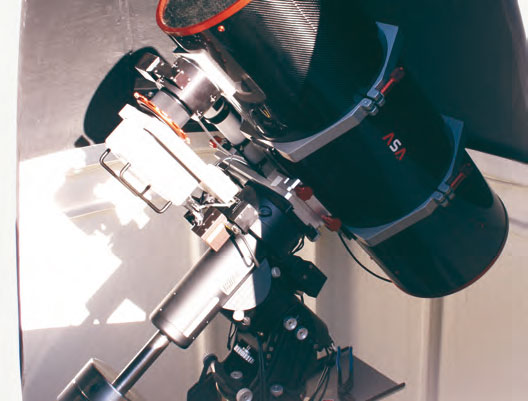 Upgrade 1: 10micron GM2000 HPS with 12" astrographs in the the small observatory 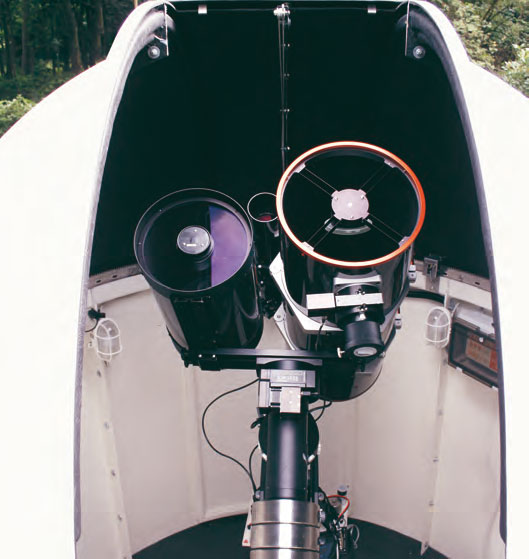