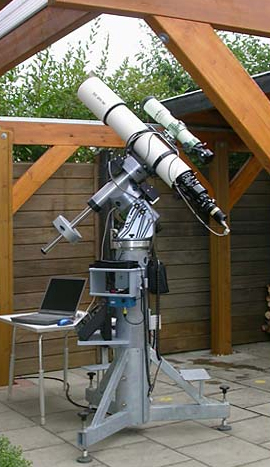 The astronomical interest awoke with me already in the youth. But it should take decades until I decided to really get into this hobby. My first equipment was a 5 inch refractor and an Astro Physics mount CNC400. I did my observations mostly from my home garden, as I still do today. Soon astrophotography was added, because photography was another hobby of mine....

After some years the desire awoke on a still more stable and more load-carrying Montierung, which should have also Goto - ability. My previous mount could not do that. During a visit in 2004 at Baader Planetarium I got to know the then completely new mount GM2000 QCI of the Italian manufacturer 10micron. From the beginning I liked the mechanical design and precision, but also the concept of the control with its various possibilities.

In the showroom, mounts from another well-known manufacturer were also available for comparison. Among other things, I noticed the smooth running of the GM2000, even at high slew speeds.

So I decided to buy the GM2000 QCI. However, I was told that the firmware for the control and operation was still in the testing stage. I would have the possibility to work with beta tests and own suggestions on the further development of the mount, respectively the control. I actually wanted to buy a "finished" mount, but I was attracted by this kind of participation and co-design of a product, especially since the basic concept convinced me. The manufacturer showed a high degree of willingness to cooperate with the user's well-founded wishes during the testing and introduction of suggestions for improvement. It was a good cooperation.

I had set up the GM2000 quasi-stationary in my garden. The mount was on a column tripod permanently outside, covered and protected by a truck tarpaulin. The telescope was put on only when needed, likewise control box and hand control unit were connected only then. The mount always remained optimally aligned, which shortened the setup times before an observation.

The mount has proven to be robust, reliable and accurate. I found the operation with the handheld to be extremely practical and clear. The object catalog was very extensive, and could be updated regarding comets and asteroids from the Internet, an invaluable advantage especially when observing "new" objects.

For the firmware update to version 2, I was again allowed to participate as a beta tester, together with some colleagues. Again, the manufacturer was open to suggestions and ideas for improvement, a behavior towards the user that is rather rare in my experience.[br] 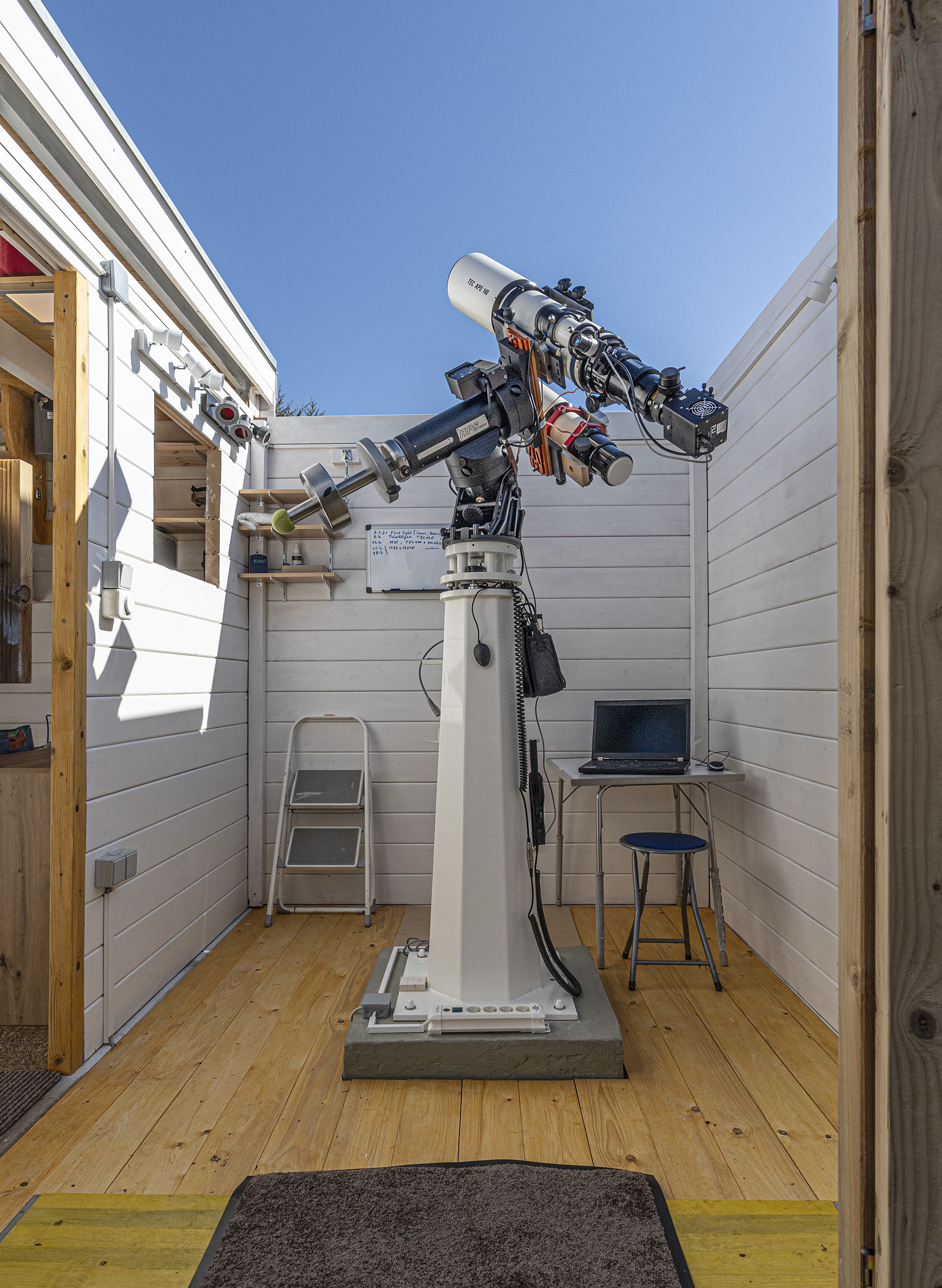 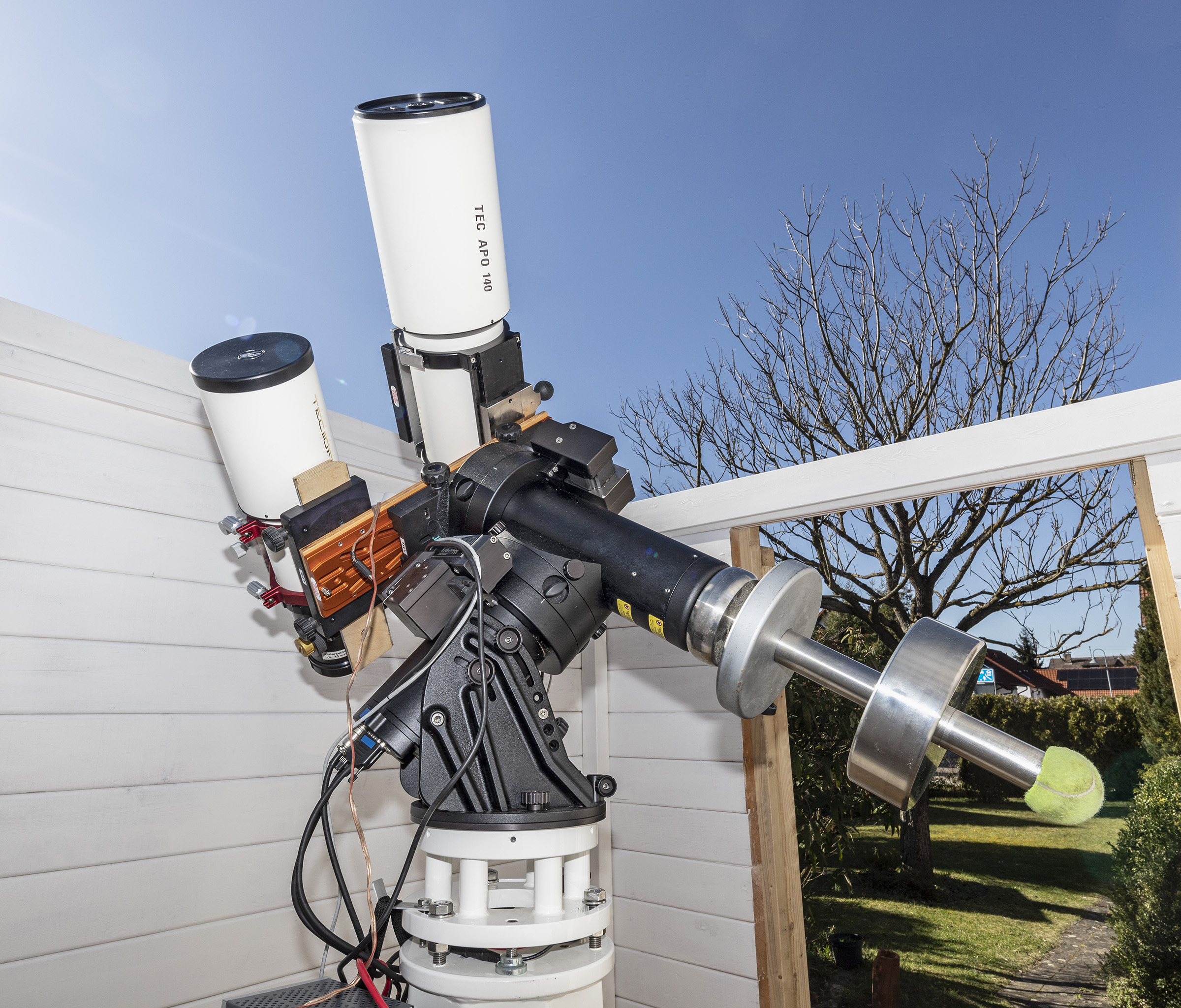 In 2011 the new mount, the GM2000 HPS, was released. I was asked at that time if I would like to test this mount in practice. I gladly accepted, and together with Rolf Geissinger, a renowned astrophotographer, I was a beta tester of this mount. Each of us had tested independently, but of course we had exchanged information with each other. The result was that both of us independently had found a certain misbehavior of the mount or the firmware. Eliminating this misbehavior was apparently quite challenging. Anyway, this delayed the planned launch of the mount by almost half a year. I find such a thing honest and customer friendly, which in my experience is quite rare to encounter.

I have subsequently acquired this mount, and the previous GM2000 QCI, which had been revised shortly before by 10micron (the periodic screw error was then only +/- 2 " according to my investigations! ), was sold via Baader Planetarium - as far as I know to an astro club in Baden.

Since mid-2011, I now have the GM2000 HPS, which I operated again quasi-stationary on the pillar tripod.

So far, I had always observed in the garden from a small terrace behind the garage. But over the many years, the trees in my neighbor's yard had grown so tall that my clear sky view was becoming more and more limited. In this situation, my wife and I decided to observe from another spot in the garden that allowed a clearer view. Unfortunately, there was an apple tree there, which had to give way. It had not given us any joy for years anyway. Thereby the idea came up to build an observatory right away, namely a roll roof hut. This integrates itself very well into our garden, and made also with the permission by the building office no problems. A fixed observatory is something fine. To squat outside in winter, as before, when maybe a cold wind is blowing, I didn't want to put myself through that any longer. After all, you don't get any younger. When everything is set up ready to go, you can also make better use of an unexpected cloudburst.

Planning began in the fall of 2018, and by the time the project got underway, it was 2019. The roll-roof observatory was realized by Mr. Stefan Reichmann of www.rolldachuette.de largely according to my ideas and wishes. An attempt to have the roll top hut made by a wooden hut manufacturer located near us failed. These companies have party huts, sauna huts, etc. in the program, but to a roll roof they did not dare. They were at least honest, I must say. Then my research led me to Mr. Reichmann. From a construction company in our town, I had a stable foundation built.  In the fall of 2019, the construction of the roll roof hut was started. By early 2020, the observatory was ready for operation, although not quite finished.

"First Light" was in early March 2020, during which I was fortunate to take advantage of a period of good weather. The roll-roof hut worked out very well.

The GM2000 HPS is now on a modal steel column from Baader Planetarium and currently carries two telescopes: a TEC 140 ED and a TEC 110 FL. Due to the fixed setup of the mount I will now usually take my deep sky images unguided, which I have done occasionally so far. But now this will become the normal case. At the first recording sessions this has proven itself in any case very well. I now do dithering via Maxim DL "via mount", since the usual dithering "via guider" is no longer possible.

I have the impression that I now have a setup with the garden observatory and the GM2000 HPS mount, which fits together perfectly. 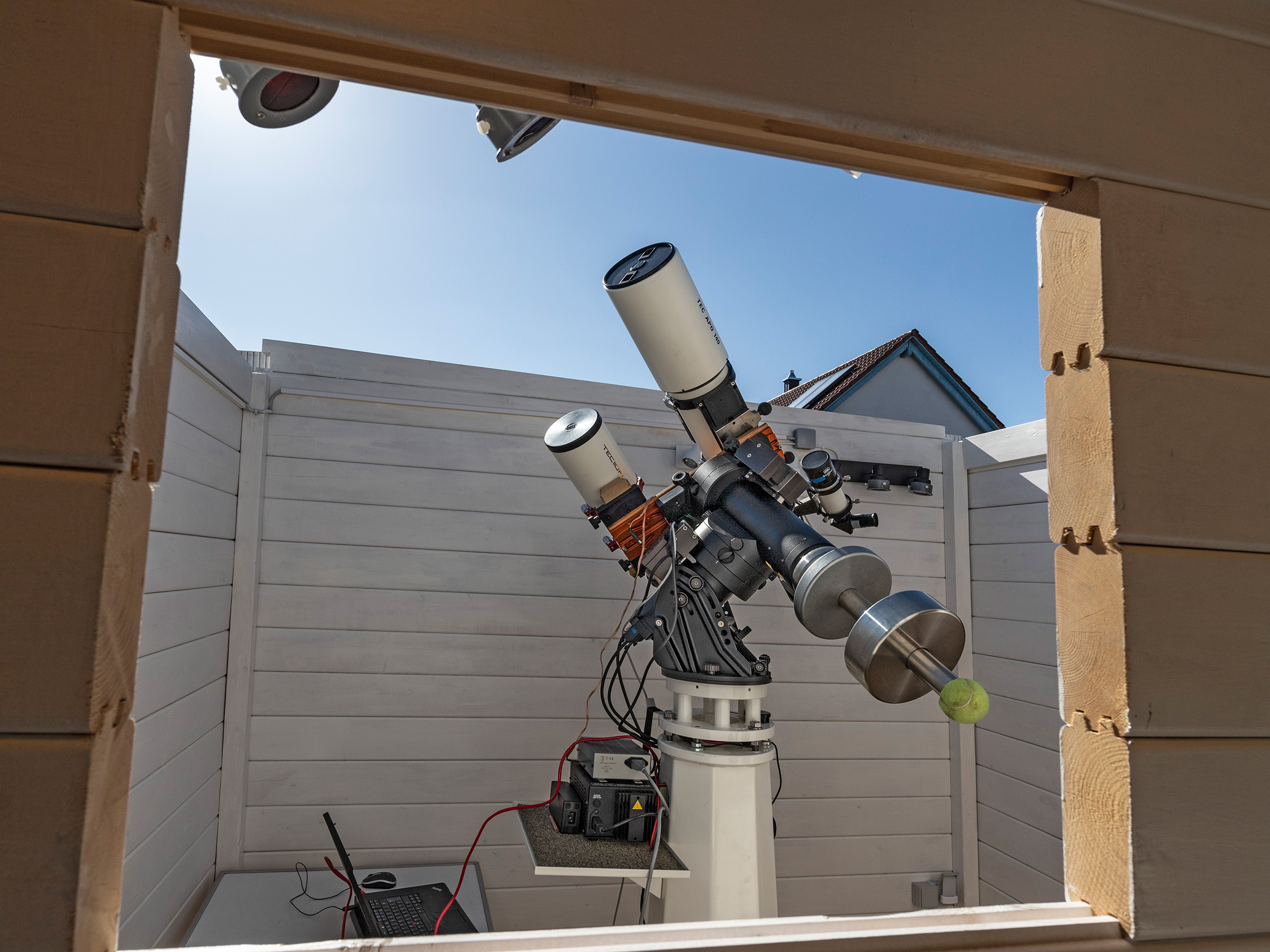 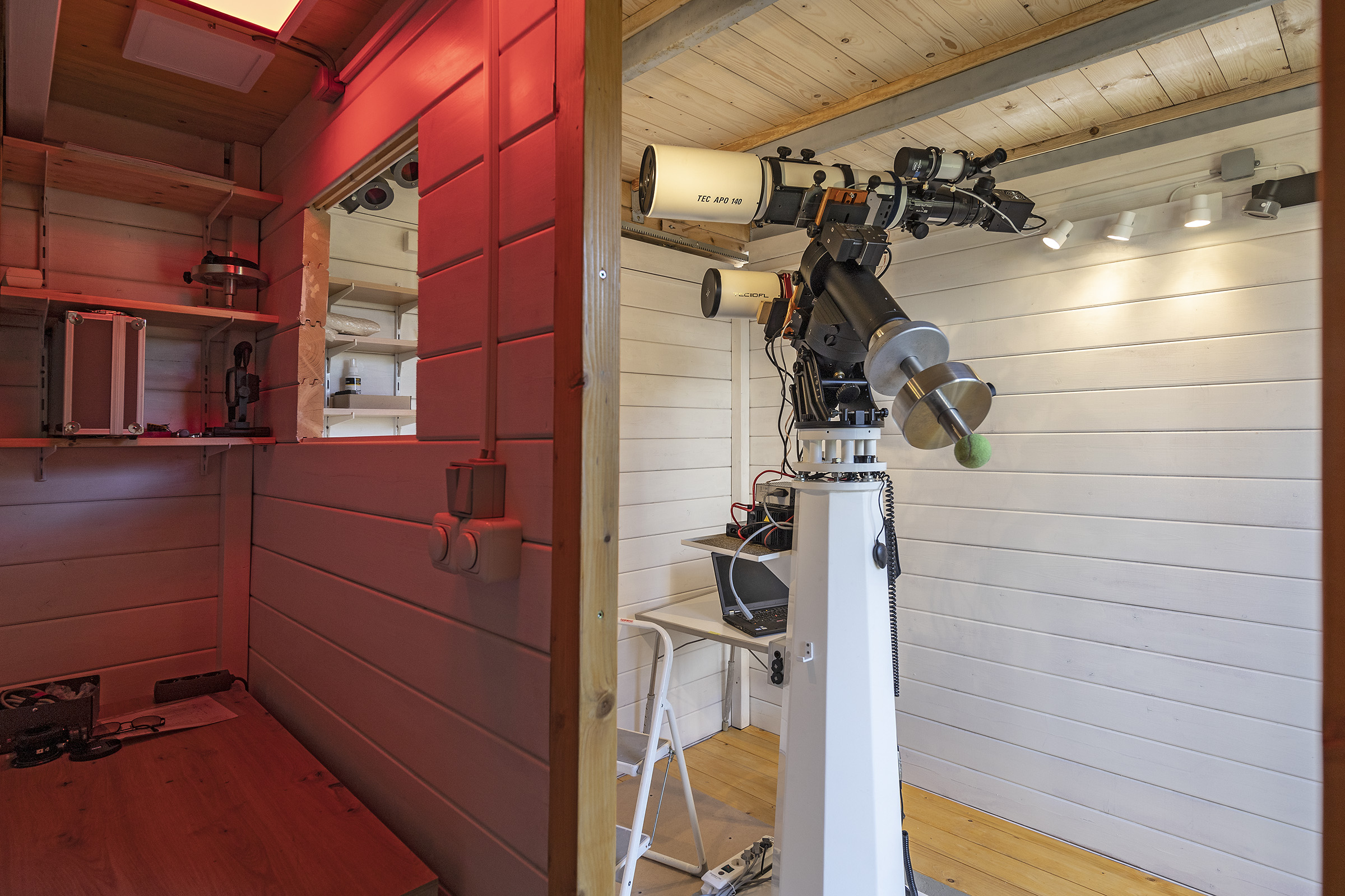 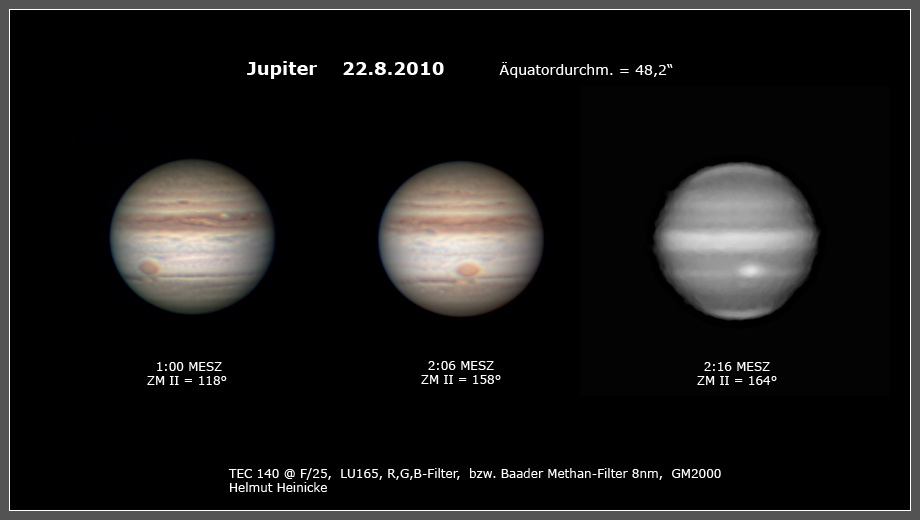 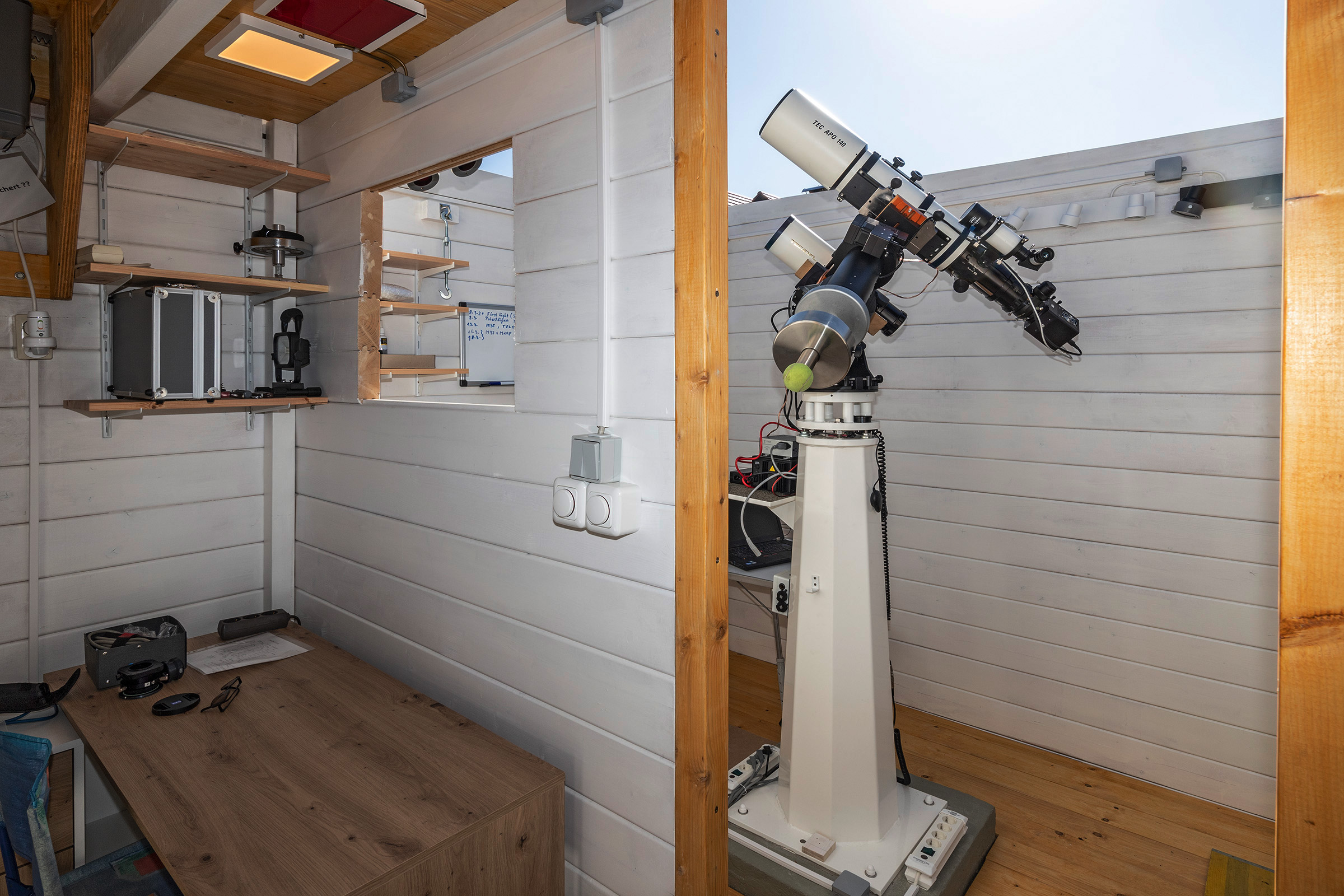